In my last post, I covered the marvelous world of Firebase database spelunking: when app developers misconfigure their Firestore security rules, the resulting ability to perform unauthorized data accesses can lead to terrifying data breaches for those apps. Thanks to tools like Baserunner, testing apps for such misconfigurations is easier than ever.

By saving authorization state when logging into Firebase databases using email/password or phone/OTP sign-in methods, Baserunner lets you focus on actually querying the database for data. However, what happens when client apps only allow sign-in using a Google account?

This blog post covers how Glen Husman and I conducted security testing of such a Firebase client app, using a clever solution to grab the Google OAuth token to sign into the database with. I then used lessons learned from that engagement to contribute Google sign-in functionality back to Baserunner.

The motivation for this exploration was a security inspection that Glen Husman and I conducted in February 2022 on a Stanford student-created website that stored some moderately sensitive user data. The site was a Javascript single-page application (SPA) backed by a Firebase database that only allowed Google sign-in via Firebase authentication.

We found minor issues relating to Firebase security rule misconfigurations leading to some unauthorized data accesses. We disclosed these vulnerabilities on February 27, 2022 and received confirmation that they had been fixed on March 28, 2022.

To respect the student’s and app’s request for anonymity, I won’t disclose any further details about the engagement, and the examples I use will relate to a demo app I created solely for this post.

A brief background on OAuth

OAuth is an protocol meant to delegate access between applications that decouples authentication from authorization. That is, the identity and authorization provider (e.g., Google) can be a different entity from the application the user is actually logging into (e.g., Notion). Furthermore, OAuth usage can be scoped to allow the requesting application to access data owned by the identity provider.

For more information, refer to this blog post by Okta and the official OAuth documentation.

Here’s a potential security problem with OAuth: suppose that our favorite example banking site https://bank.com supports logging in with OAuth using Google as an authentication provider. When a user (Alice) goes through the Google sign-in flow on bank.com, bank.com is provided a token used to authorize access to Alice’s data on bank.com, which is then passed to her browser.

Now suppose Alice received a phishing email leading them to click on https://b4nk.com, a phishing site that looks exactly the same as bank.com. Just like the legitimate bank site, Alice is asked to sign in with Google. If b4nk.com uses its own client ID for Google sign-in, then all is well, as the scoped token that is returned only allows access to data on b4nk.com.

However, suppose b4nk.com identifies itself to Google as bank.com using the latter’s public client ID. If the flow completes successfully, then b4nk.com has successfully obtained a token for Alice’s account on bank.com, which can then be used to access Alice’s banking data. This is a clear security violation, and should not be allowed to happen!

Thus, applications themselves must have some way of authenticating themselves to the identity provider such that only legitimate applications can request access tokens for their sites.

When an OAuth sign-in flow is conducted, the application will pass along its client secret to the identity provider, which will only return the access token if the client secret can be verified.

In contrast, a JS SPA is a case where all requests are made from the user’s browser; i.e. there is no application server that can hold a client secret. But such an application can still fall prey to the phishing attack mentioned earlier.

Thus, to ensure that only legitimate applications can obtain a user access token, the identity provider can enforce a restriction on what origin the sign-in flow request can come from. Typically, these origins are configurable when setting up OAuth with the identity provider.

This effectively stops the phishing attack: https://b4nk.com is a different origin than https://bank.com, so the identity provider can block the request rather than responding with an access token.

Signing into a Firebase database with Google OAuth

For more details on exploiting Firebase misconfigurations, including a case study, please refer to my last post.

Recall that to make requests against a Firebase database, we need a set of API tokens found on the client side, as well as an authorization header. For an SPA, the former is easily found by inspecting the minified JS source code of the page.

But with Google OAuth sign-in, the process is a little more complicated:

As Baserunner did not support this flow when Glen and I first investigated a Google OAuth-only Firebase client app, we had to cobble this together ourselves.

To demonstrate this process, I created a demo Firebase project that only accepts Google sign-in. Note that I’ve taken this down by now, so trying to hit this endpoint will get you nowhere. The API tokens were as follows; again, you can find these from the JS source code of an SPA.

I then created a user account for the project backed by my Google account (aditya@saligrama.io), as well as some test data in Cloud Firestore to be queried for.

The objective here is to get the Google OAuth token for aditya@saligrama.io corresponding to the demo app that can then produce a Firebase authorization header. This can then be used in a Node.js script to query the database.

As OAuth is a communication protocol between web applications, we need to actually be running a web server to try to get the OAuth token. Let’s use the simplest possible option: Python’s http.server module, serving a simple HTML and Javascript page.

When the sign-in is successful, we should expect to see the Google sign-in info printed in the console.

This loads a page with a Google sign-in button, as expected: 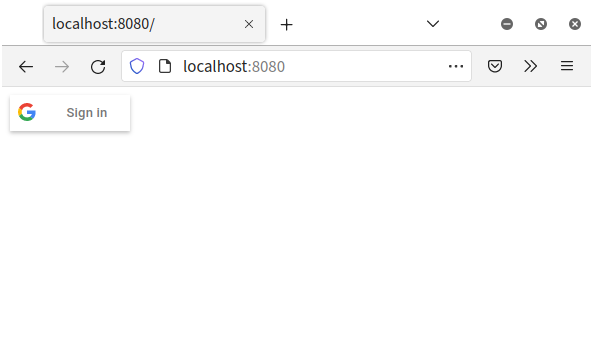 Clicking on the button yields a pop-up with the Google sign-in flow; after succesfully signing in with aditya@saligrama.io, the pop-up abruptly closes. Checking the console, we see the following:

Clearly, the issue was with the domain we were loading: http://localhost:8080 is not a registered origin for the demo app. We’ve run up against the aforementioned origin restriction issue! Let’s try using the Firebase project’s domain itself.

We now want to use saligrama-oauth-demo.firebaseapp.com as the domain. While this is a host with its own public IP address (199.36.158.100 at the time of writing), we can tell our local machine to point the hostname to any IP address of our choosing (including the local host, 127.0.0.1).

This is done by editing the hosts file, adding a line containing the following:

Recalling that an origin is comprised of a scheme, a host, and a port, we should probably also run the web server on port 80, which requires administrator permissions on Linux:

Now, we load this in our web browser, conduct the sign-in flow, and check the console: 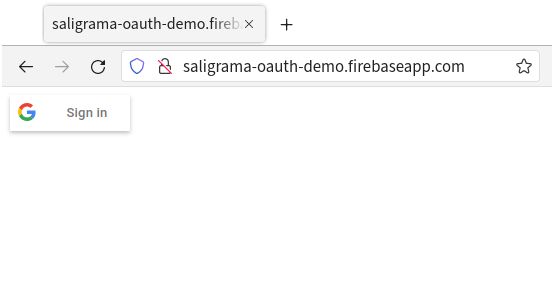 Another failure. Maybe changing the scheme and port, using HTTPS over port 443, will help.

Attempt 3: HTTPS, where the S stands for Success

We then need to actually allow our Python HTTP server to serve over HTTPS; a light modification to this GitHub Gist suffices:

Naturally, as the certificate is self-signed, Firefox throws a warning that can be bypassed. In some cases, if you’ve already navigated to https://PROJECT_ID.firebaseapp.com, your browser will actually refuse to let you see the self-hosted page due to HSTS settings. HSTS is a policy that stores HTTPS certificates associated with websites and prevents users from accessing those websites again if the certificate does not match the stored one.

In this case, you’ll need to clear HSTS settings by clearing all data associated with the site from your browser. 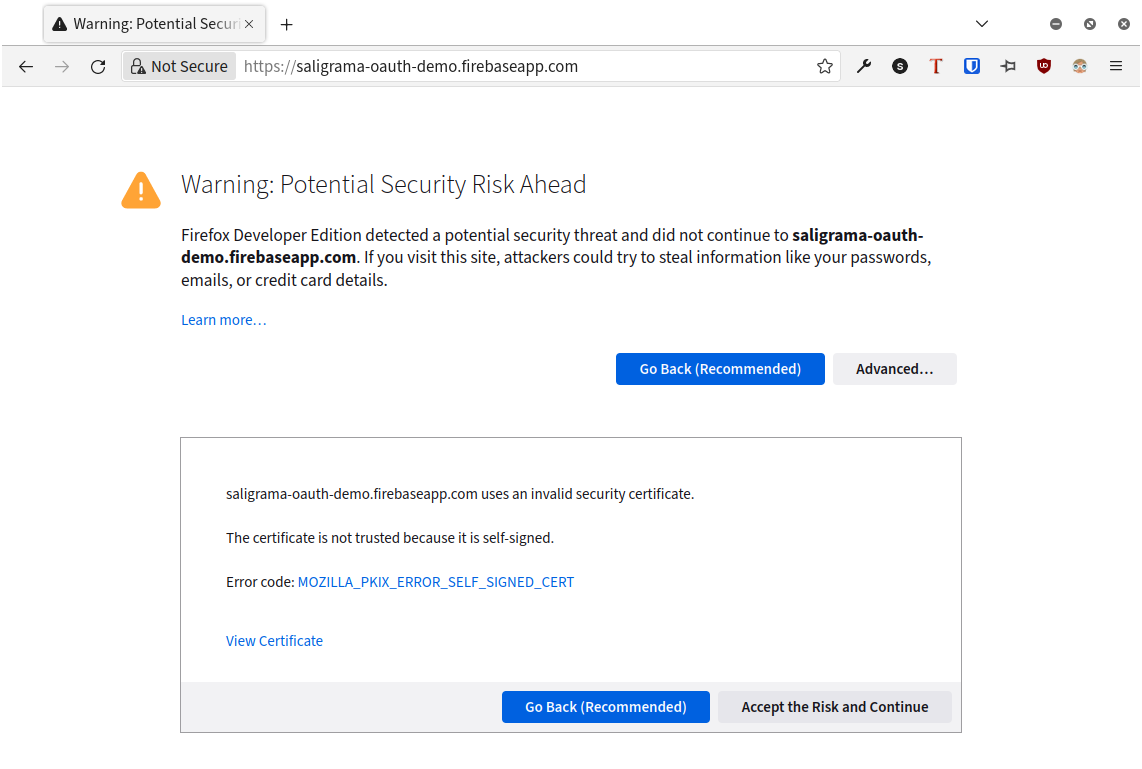 We again go through the Google sign-in flow and check the console, which yields the token! 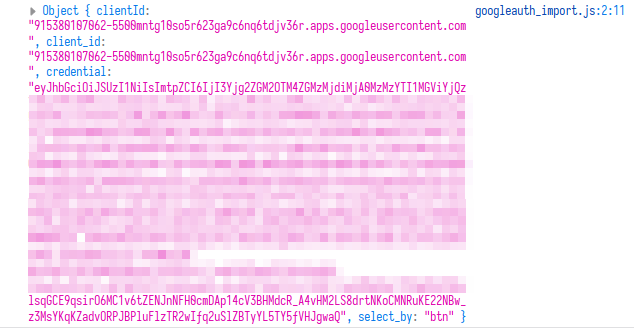 I should note that I’ve seen some projects follow Firebase default settings to allow http://localhost (port 80) as an origin, which would shortcut the hostname and certificate process. However, I’ve also seen projects remove localhost as an acceptable origin once in production, so it’s more reliable to use the actual Firebase project’s domain over HTTPS as above.

Now that we have the token, we can query the Firebase database for data using a Node.js script, similar to the example from my last post.

Running the script, we get the desired data.

Coincidentally, the lack of Google sign-in support was an open issue in Baserunner for nearly 18 months. With what I’d learned from this engagement, I was able to add this support to Baserunner. This required adding a way to set the Google client ID on the frontend and dynamically generating a Google sign-in button based on that input client ID, then plumbing the resulting credential through to the saved Firebase state for login.

My pull request was merged in August 2022. We can now use Baserunner to query for the data! 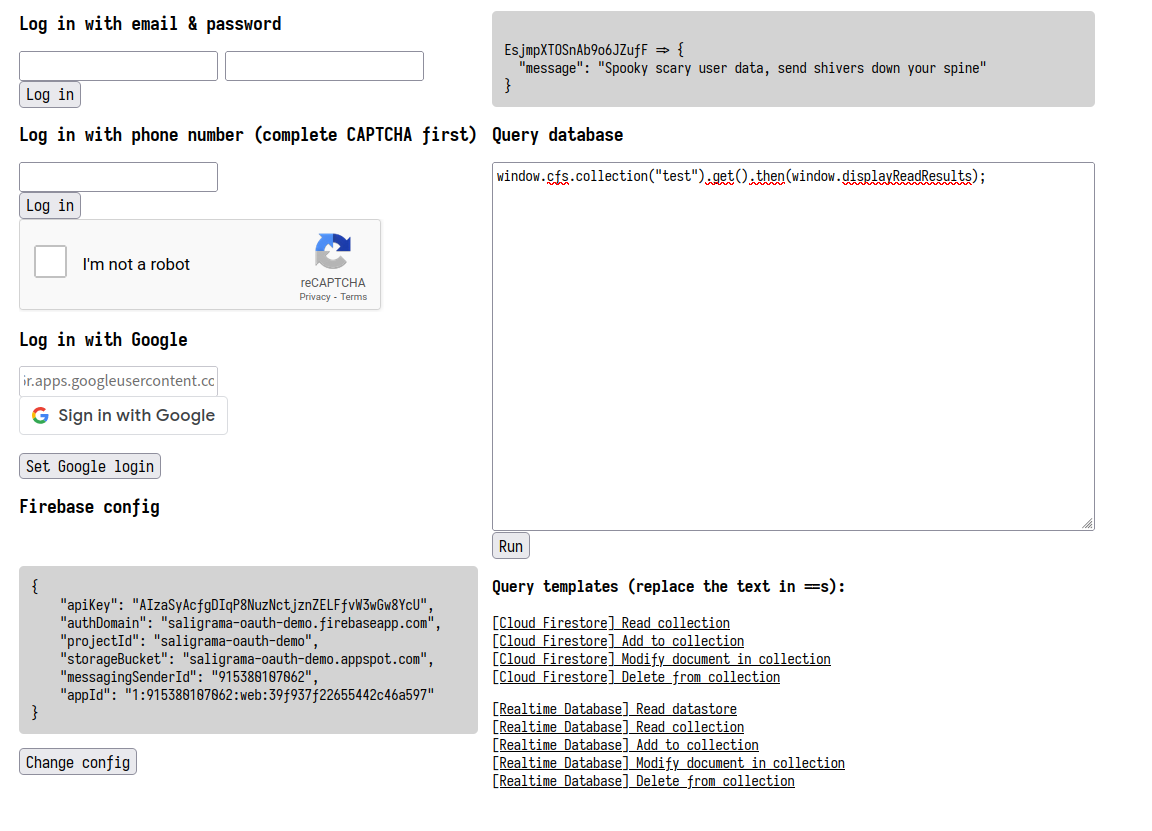 While Google sign-in can make it more difficult to sign into Firebase databases for exploratory purposes outside the official app context, it’s not impossible, as this work shows. Bypassing the origin restriction enforced by the Firebase authentication requires some finagling, but I hope this post serves as a guide on how to do so.

With mainline Baserunner support for Google sign-in added by my pull request, exploring Firebase databases has never been easier.